Can anyone decipher Merchant and RNR Docs please

Can anyone decipher Merchant and RNR Docs please 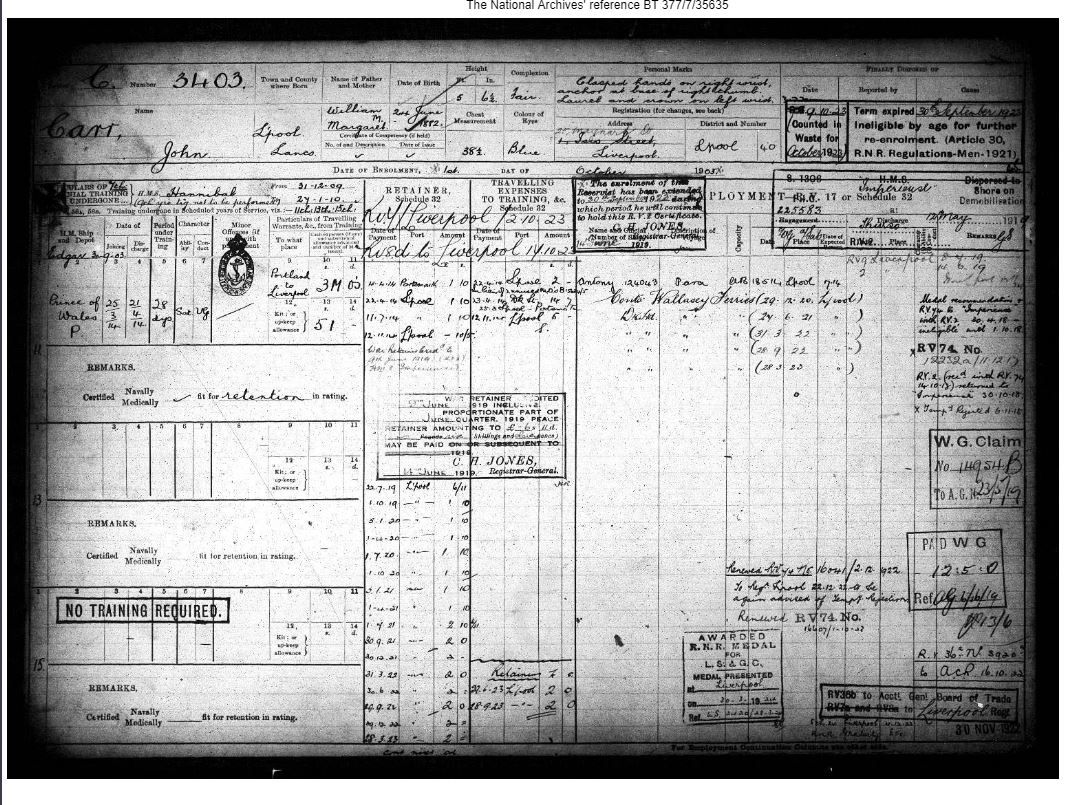 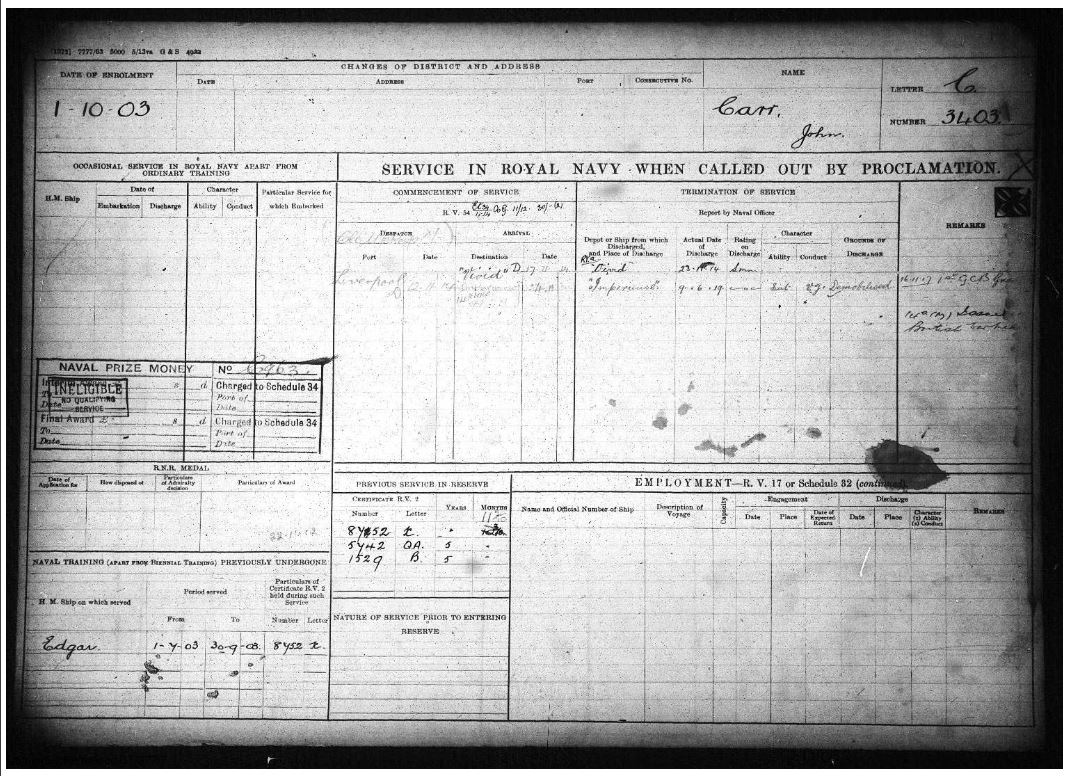 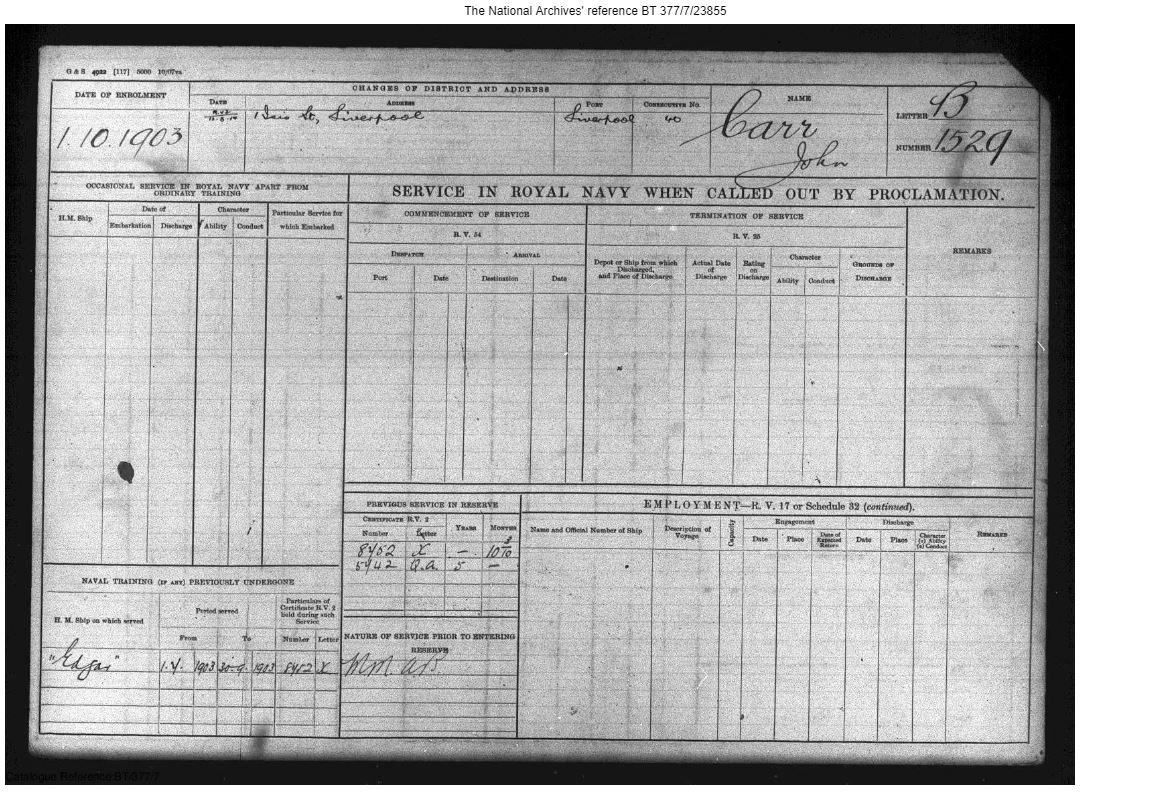 OMG, that is fantastic. I did it.
Thank you so much for all your help.
Top

it might be better to break it down and ask questions about areas that are troublesome for you, anyone wanting to help may find it easier that way.
Bert
Top

Yes, sorry I am not knowledgeable about naval records, but if you call the pages 1, 2, 3 and 4 and ask specific questions, hopefully one of our members will know more.
MaryA
Our Facebook Page
Names - Lunt, Hall, Kent, Ayre, Forshaw, Parle, Lawrenson, Longford, Ennis, Bayley, Russell, Longworth, Baile
Any census info in this post is Crown Copyright, from National Archives
Top

Some time ago I mentioned that I would try and assist with the documents you were having trouble with. Since then you have posted the images, but, typically, I haven't been able to log in since my earlier posting (it's an ongoing problem that Mary knows about). Anyway, I've taken a look at the 3 images (images 1 and 3 are duplicates) but I can't determine what exactly needs elucidating. In broad terms, the documents show that John Carr was in the Royal Naval Reserve (RNR) on three separate occasions and was called up for active service during WW1 then dischaged. The one thing which I can't tell you about is the reference to a 'WG Claim' recorded on the 23/5/19 on the right hand side of image 1. I have not been able to discover what W.G. stands for. The fact that the claim was subsequently paid suggests that the 'G' may stand for grant or gratuity, so possibly some compensation for loss of his civilian income during his period of active service, or for some disability arising from a war wound ( I think the latter is less likely as war pensions and disability payments were largely handled by the civilian Ministry of Pensions (see the third paragraph of this Wikipedia article), not the department of the Accountant General Navy (AGN). Either way, £12/5 shillings is quite a lot of money by 1919 standards, so there may be some other explanation.

Here are a couple of links to other websites which might be useful:
Exeter University Centre for Maritime History and within that site this useful guide to Naval records at the National Archives:https://humanities.exeter.ac.uk/media/u ... ecords.pdf
Navy Net - I suggest starting with the Welcome to Naval history thread.
And of course more general places to check would include the Imperial War Museum,
the National Museum of the Royal Navy and
the Merseyside Maritime Museum for more on the merchant Navy's history.
The first two are definitely closed at present even for online enquiries, and I suspect the Merseyside Museum may also be be closed but its website indicates otherwise.

If there's something else I've missed, please let me know and I'll do my best to answer.
Top
Locked
5 posts • Page 1 of 1