Can a kind soul please look at this British Army Service record and give me the details.

It doesn't appear on Anc, though elsewhere.

Thanks for looking, John.

What started as scratching an itch has turned into, I'll probably need a bloody skin graft.

If someone can decipher the codes, 1939 reg, I'll be very grateful.

1891 census is relevant to the 39 register conundrum?

Richard J Irving is living along with his brothers with sister, transcribed as (Anc) Jane Heatly, Widow, her sons, Luther and Stanley in Birkenhead.

After the death of her husband, Alfred Edward Heatley (Deaths at Sea) She married him as Jean Isabella Irving, 1884, Stockport.

She and her 2 sons went to the states, her death certificate confirms her parents names, as sister to Richard J Irving.

Mary also sent me Military information, yet another puzzle to solve, what's is he doing in Birkenhead, 1901 census, working as a Bricklayer.

She first married as Eileen I Heatley/Edgar L Pritchard, 1932, Romford.

The 1949 marriage you posted followed in Birkenhead.

Don't know about the 1970 marriage, perhaps something went amiss in the marriage and she reverted back to a former name? needs looking into.

I was hoping someone had knowledge of the 39 codes, the date next to Mary Irving,39 reg, is just after she was widowed. Wondering if any significance?
Bert
Top


If someone can decipher the codes, 1939 reg, I'll be very grateful.

I have no wish to insult anyone's intelligence (especially Bertie who has way more family history experience than I do) but as far I can see the entry for Eilleen M Pritchard/Wakelam breaks down as follows: 20 12 49 refers to the date the register was updated (by the National Health Centre) to reflect her marriage (not sure if the 20th was the actual date of the marriage). LAA is the code for Birkenhead (more details on FMP here), and the m l/c refers to the type of event, namely marriage, which was the reason for the change. I'm not exactly sure what the l/c bit means. I hope this helps.
Last edited by AndyJ on 08 Jan 2020 15:44, edited 1 time in total.
Top

What started as scratching an itch has turned into, I'll probably need a bloody skin graft.

If someone can decipher the codes, 1939 reg, I'll be very grateful.

Hi Bert, the codes are registration districts. LAA for example is Birkenhead. The NR230 is a national change of name register, apparently not open for another few years. Not sure if the date is the date of the marriage, or the date registered, with the bride's married name written above the maiden name. FMP has a page of registration districts. If you need any more, let me know. I don't have an online account for images to paste, but if anyone has, the link is https://www.findmypast.co.uk/articles/1 ... -districts.
Names - Orrett, Orritt, Ross, McCabe, Keeley, Bullen, White, Leatham, McKeon, Bilsbarrow, Yates, Sennett, Sinnett, Traynor, Ashton
Top

Thanks Andy for your contribution and link,

Done some digging and the code I thought might be relevant to Mary Heatley/Irving was NR230, so far it appears, change of name without marriage or by deed poll.

Must have had good reason for it, perhaps needing to disappear.

NR230 does indeed appear to be a change of name by Deed Poll.

Following exchange may be relevant/of interest.

Yes interesting link, I think Mary Irving on this occasion just came clean, however that was achieved and no deed poll was involved.

If the date is the date she returned to using the name Irving, it was 1 month after the burial of her husband Richard J, buried as Irving.

The daughter Eileen Mary married using the name Heatley, 1932. The name change must have taken place between 1911 and 1932.

1911 the family are in Birkenhead as Irving's.

The image below is a portion of his Army record, I suspect he went AWOL and when returning South he acquired a new identity. 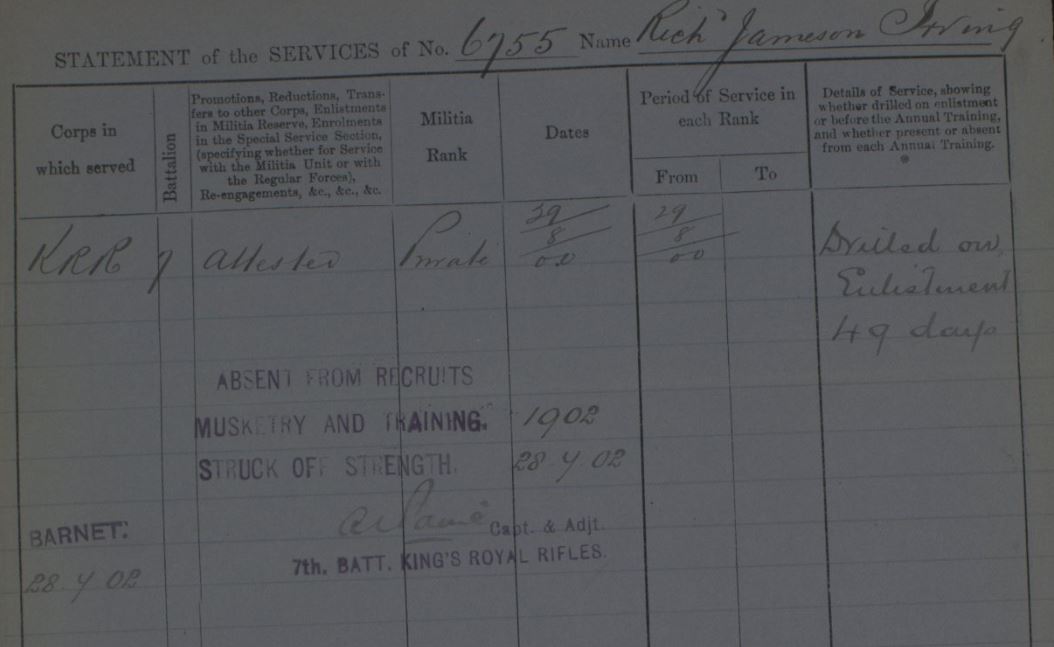 Haha the things you dig up so amuse me. I can confirm with Andy above that the dates marked on the Register may be close to a marriage but not necessarily the exact date as it would have been when the wife next visited the doctors and advised of her name change.
MaryA
Our Facebook Page
Names - Lunt, Hall, Kent, Ayre, Forshaw, Parle, Lawrenson, Longford, Ennis, Bayley, Russell, Longworth, Baile
Any census info in this post is Crown Copyright, from National Archives
Top

I never dug him up, honest.

All sorted now, thanks everyone who contributed.
Bert
Top
Post Reply
19 posts • Page 1 of 1