Was he Dennison or Johnson ?

For queries within the area of Lancashire between the Ribble and the Mersey.
This board covers the areas of all our Groups - Liverpool, Southport, Warrington, Skelmersdale, Leigh and Widnes.

No doubt you have seen the below, Medal Roll. When JFDJ joined the R.A.M.C.1918 and there is mention of his father, how is the father recorded, Deceased, Next of Kin, etc.?

Bert, not sure what this record refers to. It is definitely him, the number is correct. But there is no date on it so I am unclear. He was discharged 2.3.19 and again 2.5.40
The only mention of his father says "Occupation of father : Ships Officer - name not recorded"
I would like to post the full record but have had trouble registering with imgur. Also, the email option through this forum doesn't see to alloww attachments.
There several addresses mentioned on the record, most around London, dates 1930, 1939 1nd 1940. If you think they could provide clues I will post them

Regarding 'Sarah Holdsworth at 23 Gt Georges Sq, SS97 said in an earlier post that Holdsworth died 3 years after their marriage and left all his effects to his son. Hence she was left without a cant or a home. Maybe that's why she took a live-in job?
Top

I'm following these developing lines of enquiry with interest. The Sarah Holdsworth 1911 census certainly fits some of the detail, so is feasible. I have written to 3 other Ancestry members who have Lilly's 'second' husband Thomas Thornely Holdsworth in their tree to find out if they know what became of Lilly after the death of Thomas. No new information from those sources so far.

Martin, where I said that Thomas Holdsworth's probate summary shows that he left all his money to his son, I'm now wondering whether those published details might just mean that he named his son as the executor to his will. The actual will might show that the monies were distributed widely, or might have even been written before his marriage to Lilly (though based on current rules of law, I believe a subsequent marriage would have invalidated the previously written will). I think I will invest £1.50 in applying for a copy of the will, to see if any extra information can be gleaned from it. I will update this discussion upon receipt.

Just to confirm that you are right that a subsequent marriage invalidates an earlier will. As for ordering a will, I hope they have got their act together now. The last time I applied for a will shortly after the new fee of £1.50 was introduced, it took them 5 weeks to fulfill the order. The service has been outsourced by the Probate Service to Iron Mountain.
Top

It can't do any harm, who knows what might turn up?
Bert
Top

Bert,
all that fits with what's on his war record - it mentions the medals too. I have sent SS97 a copy, if she has figured out the imgur thing maybe she could post a copy here.

I also have another letter from the Army Records Office saying "place of enlistment : SUTTON" (this is when he enlisted for the second time in 1930) Occupation given as 'Warehouseman'.
Top

At the time he disappeared he was living with wife and all 4 children at 383c Nether Street. Which I think is Golders Green or close by.
Top

AndyJ, nice to see you join our discussion. I didn't know that the Probate Service had outsourced the copy applications to another company. However, the last copy will I applied for at £1.50 (so assume the outsourcing had already happened) was on 9 November 2020, the anticipated delivery date was given as 24 November, but it then landed in my inbox on 13 November, only 4 days after application. I was very impressed! But thanks for the warning about possible delays - I shan't hold my breath!
Top

Just because I'm a little bored yet so pleased by Bertie's contributions to my own current thread, here's some more useless information about wills and marriages.
Section 18(1) of the Wills Act 1837 set out that a pre-existing will would be invalidated by a subsequent marriage. The Administration of Justice Act 1982 then amended this to allow a will to be made ahead of a marriage as long as it was clear that the testator intended the will to have effect after marriage. This led to two standard clauses being adopted as best practice:
1) I hereby make this my Will this ___day of [month][year] which is conditional upon my intended marriage to [name of intended spouse] of [address] being SOLMENISED within ___ months of the date hereof ....
or 2) I [name of testator] do hereby make this my Will in contemplation of my impending marriage to ____.

Use of either clause could also allow a reversionary clause to take affect if the marriage didn't go ahead, meaning that a new will would not necessarily be required in that event.

The same law also says that if a marriage is subsequently annulled or dissolved by order of a court, any disposition in favour of the spouse in a will would lapse, unless the wording of the will expressed a contrary intention. Afternote; This only applies in England and Wales. In Scotland a will continues to have effect even after a divorce. Therefore anyone remarrying in Scotland for a second time needs to make a new will if they wish their new spouse to inherit.
Last edited by AndyJ on 10 Jan 2021 19:14, edited 1 time in total.
Top

I couldn't see anything at Beechcroft Rd or Amersham Rd that might offer any glimmer of help.

Great Peter Street appears to be made up of Peabody Buildings, blocks A to E, No 10 Great Peter St could be any block, they all have a number 10.

However I'm not yet jumping for joy yet, Block D at number 10 has Charles Albert Auberson and Eva Auberson.

At number 8, Block D, the following,

It could be the Johnson's had no room and the Auberson's did for him to stay. It could be just a coincidence.
Bert
Top

The above, William Johnson is the head of this household, it doesn't appear he had a son, John, if he did the ages would be way out.

It doesn't appear he had an older brother John.

John Johnson, Ships Officer still eludes us. The Johnson's of Great Peters St could just be one of those coincidences sent by the genealogy devil

Bert, it occurred to me that for JDFJ to sign on as crew on at least two merchant ships seems rather odd. He was a good musician and qualified as an analytical chemist. Seafaring would not seem to have been his thing. Maybe he was just at a loose end or could it be that he did know his father and it was he that put him up to it. By the look of the crew lists they are the ordinary ranks, could his father actually have been an officer on one or other of the ships he served on? Is there any way to find out who the officers were on such ships? Also I am sceptical about him having served on the Lusitania, maybe he just blagged that to get himself a job.
Top

Lilly/Sarah declares herself a widow, 1901census, John Fleming was about 9, perhaps he was influenced by knowing what his father done for a living.

I doubt he could blag about being on the Lusitania, he probably had discharge papers forwarded to his following ship and many of his crew mates also served on the Lusitania.

1911 he shows as an analytical chemist, perhaps early days and not yet qualified.

Bert, you are probably right. He was on the Muraji when he was 18. The first record we have of him employed was when he was 22 so he had time to give up seafaring, rethink his future and go back to studies. Maybe even to university but I think at least to some sort of higher education. My great aunt Winifred's diary say he had good jobs. From notes left by my uncle I can add: He was employed in 1913 aged 22 by British Glanzstoff in Flint. I think it was a staff post as were other jobs he had because he used company headed paper to write on which suggests he was not shop floor - hence had some reasonable qualification. We have records of him in about 4 different jobs - all for chemical type enterprises in different parts of the country. One job was with H.M.Leask & Co, Sir John Rogerson's Quay, Dublin (wrote to his wife from there in May 1919 and was thought to be there possibly up until Feb 1921). In 1926 he worked for Artificial Filaments Syndicate, 3 Lord St,, L'pool. Also in 1926 he had a spell in Brentwood Mental Hospital. In Feb 1927 his wife received a letter 're his sanity' from a C.Tyran (?) of A.F.S. with whom he worked 1913 - 1915.

I noticed a slight oddity on the Muraji crew list. The crew were signed on from 26th Feb to 25th May 1910. But he left the ship 31st March. This seems quite exceptional because none of the other crew left. I can't read the place name properly - it looks like 'Seccondes' - could be west Africa (from Google search this appears to be the route the ship often took). The ship was about a month out. The reason given for leaving was "M.C." which seems to have been an acceptable reason as they paid him pro rata. Wonder why he left and how he returned.

One other snippet. He was known by the family as Jack and referred to himself as Jack or even Jackie.
Top

M.C. is Medical Certificate, so took ill perhaps, possibly came home as Distressed Seaman on another vessel or could have joined another ship as crew when recovered.
Bert
Top

I realised if it was a Medical Certificate it would have had a code, went looking and found below. 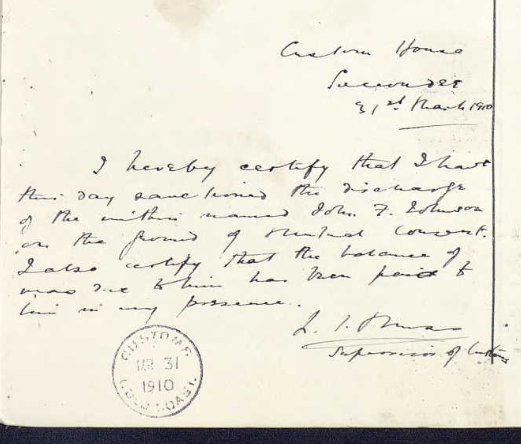 I haven't found his service papers, so perhaps destroyed in the blitz, he was in France 1917, likely joined up 1916 but not sure. 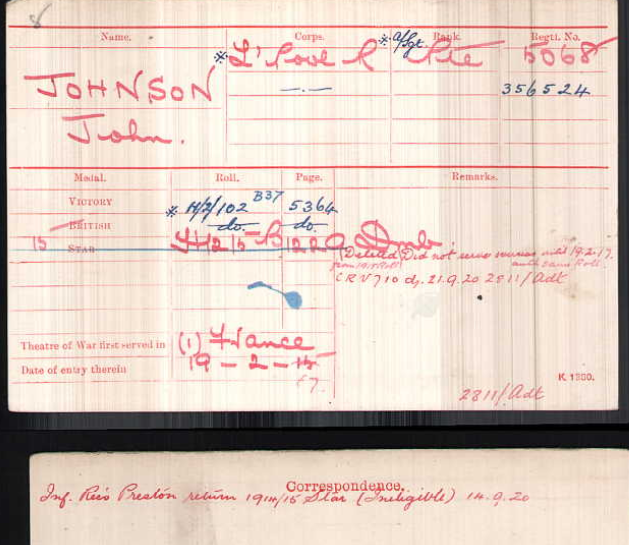 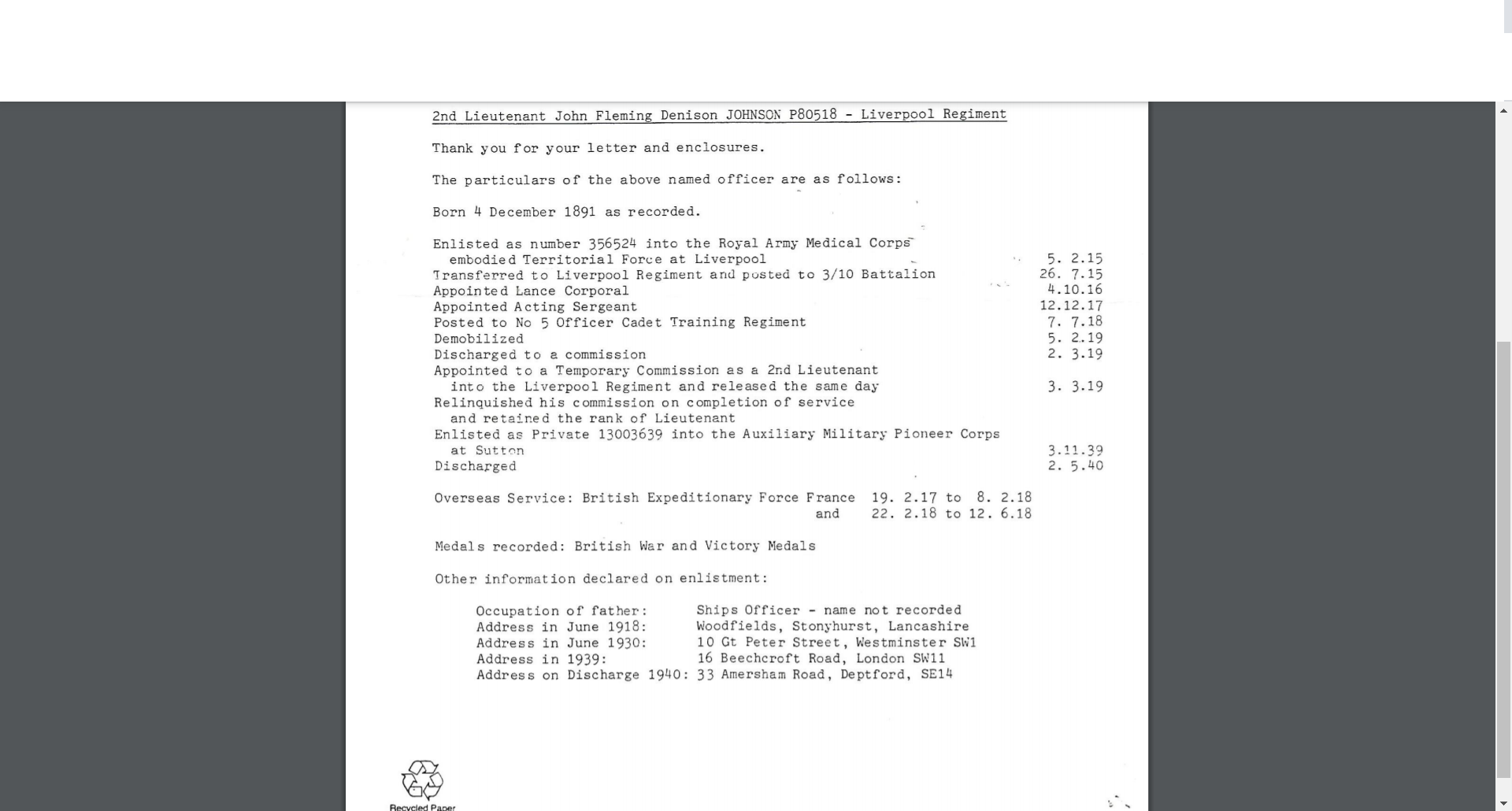