For queries within the area of Lancashire between the Ribble and the Mersey.
This board covers the areas of all our Groups - Liverpool, Southport, Warrington, Skelmersdale, Leigh and Widnes.

Thomas is my great grandad's half brother. I'm trying to fill in the blanks, before the easter weekend free, the last I had on him was the 1881 census. Then I found him on the 39 reg, so this is all working back from that. TIA
Brough, Kewin, Higginson, Lyon, Jones, Haseldine, Meakin, Robb
Top

It might be posted in bits and pieces as I come across the info,

1871 census, Thomas and Sarah Forsyth have a Sarah Ann Forsyth living with them aged 13.

The 1881 census, Thomas and Sarah Forsyth have a 3 year old grandson with them, William Coleman.

Thanks Bert. Any info is appreciated. It's taken me a few weeks to find Agnes's birth, and put what I have into place.

I found William Coleman on the 1881 census with grandparents, but dismissed it as the name Forsyth hadn't shown up.
Brough, Kewin, Higginson, Lyon, Jones, Haseldine, Meakin, Robb
Top

As unlikely as it may seem, I'm beginning to think Sarah Ann never married, just used the names of the men she partnered with.
Bert
Top

It looks like John Wright and Sarah only had one child together, may be worthwhile checking out this death,

Sarah Ann not marrying was beginning to cross my mind. I'd got the name Jackson from her kids with Thomas Johnson, but couldn't find a marriage, but with the age of Agnes, meaning Thomas would have been 15, I thought she'd been married before.
1911 census says her and Thomas have been married 22 years, which put it to 1888/89, but she was with John Wright in 1891, and had Margaret.

Could this be William and Sarah's marriage?
Marriages Jun 1887
COLEMAN William Rowlands W. Derby 8b 555
Holmes Sarah Ann W.Derby 8b 555

The only William and Sarah I can find on the 1891 census are from and in London.
No idea where the Holmes comes from, but as she seems to have lied about her age, a lot, different name doesn't supprise me.
Brough, Kewin, Higginson, Lyon, Jones, Haseldine, Meakin, Robb
Top

Looked at and dismissed her yesterday.

can't remember the rest but can look again if need be.
Bert
Top

Unless she got married at some weird place that doesn't show up on the BMD list, it doesn't look like she ever married.
I've tryed every combo, surnames, first names only, different spellings, searched from 1871 - 1939, nothing is showing up on any site. The one above is the closest, and that was a shot in the dark.

Hopefully there'll be somthing in the paper about her death, that will give some info.
Back to the drawing board on that, I've been looking at Sarah's born in the 60's. Wish they wouldn't lie about their ages.

I can't say exactly who they are, 1920 Electoral register,

Worth looking into.
Bert
Top

Thanks Bert, you just saved me a headach. I'd already got a list and was starting to eliminate them.
That cuts it down to 3

The last one i'm going to dismiss, as she was 45 on the 1911 census. The 1921 one is closest to her birth year.
Brough, Kewin, Higginson, Lyon, Jones, Haseldine, Meakin, Robb
Top

I can't open the above newspaper report, going by other newspaper snippets, it refers to Lenton as a place near Nottingham I think. Sarah Ann Johnson was strangled aged 22. Hopefully someone can open.

The Mill St couple may not be them, 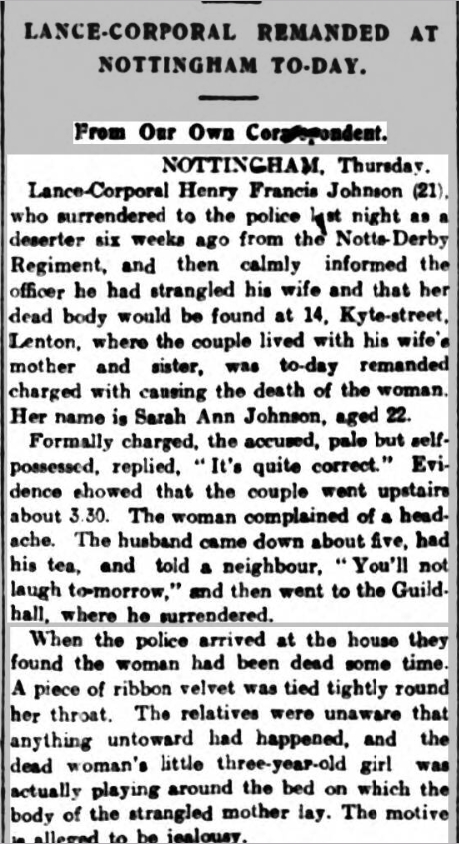 I had the same thing Bert, couldn't look at the full newspaper report. I ended up on the Lancashire library site, but they don't have the Echo. But they do have a nice thing where you can search BMD's realy easy, then I got distracted when I found Hardman Earle's funeral and death. (My hometown is Earlestown, which is named after him)

Unfortunately I think the Lancashire Library site only goes up to 1900.

I think if you are going to the library it might be that cemeteries will be the place to search, if you can find the burials they might give a clue to addresses. Obits of course also, but lacking more specific detail you might be searching the deaths in the newspaper for 3 months.
MaryA
Our Facebook Page
Names - Lunt, Hall, Kent, Ayre, Forshaw, Parle, Lawrenson, Longford, Ennis, Bayley, Russell, Longworth, Baile
Any census info in this post is Crown Copyright, from National Archives
Top

I did find Thomas's dads death in the paper.

I've already checked the burial links on the Liverpool FS page, of course the years I want you have to go to a FS center (I have found a few burials though), or the library.
Going through months of papers doesn't bother me, i've done it a few times, found a couple of intresting things along the way. Most papers tend to put things on the same page, so once you work out the page number, you can pretty much skip to that page in each issue, but, saying that, i'm liking being able to go straight to BMD's on the LL site.
Brough, Kewin, Higginson, Lyon, Jones, Haseldine, Meakin, Robb
Top
Post Reply
34 posts